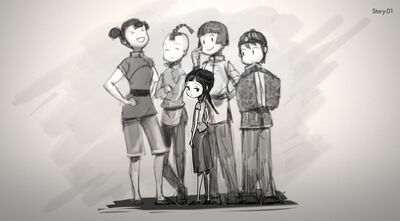 I admired how beautiful my sister looked while she was fixing her hair in front of the mirror.
After having finished, she turned around and asked me:

"So... how do these flowers look?"
"They are the most beautiful things in the world!" I answered cheerfully.

She looked at me with a smile; her skin seemed to glow under the morning sunlight.

When I was a little girl, I was very weak.
People used to tell me that I wouldn't live long, and when my mom heard about it, she decided I need to learn how to defend myself with a spear.
From the countless hours of training, my health improved...
And I even became a bit of a troublemaker, for which my mother blamed herself.

My instructor was a captain of the cavalry, renowned as the best around at his craft.
Actually, he was only one or two years older than my sister... which explains why she used to dress up when visiting my training sessions.

I saw how my sister always smiled at him, and how he returned her smile.
People often said "They would make such a great couple."

Naturally, I rooted for them with all my heart, hoping that everything would be just fine. But deep inside, we both knew that the day would come where she would have to marry a royal from another country in order to secure the future of our kingdom. 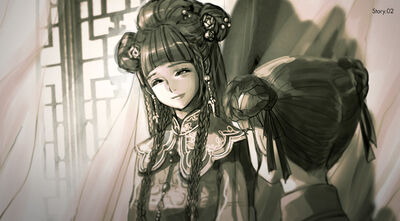 The day of her marriage arrived and my sister knew that she wouldn't be able to return.
She wept and wept.

She just shook her head and whispered: "Somethings are just not meant to be."

And just like that, my sister got married to a man she did not love, for reasons I did not understand back then.

I heard the groom came from an empire with far more advanced military and much bigger land.
I guess that was why my sister had to agree to the marriage, to protect our country.

After she finished packing, she looked at me with a smile.

A few years passed, and my sister returned to the castle.
She looked very frail and hollow. Lung disease must have taken its toll on her during those years.
Only a dew days after her return, she passed away. It was the saddest day of my life.

My spear instructor, the man she was truly in love with, stayed with us until she passed away, but he didn't attend the funeral. I could sympathize; he wanted to protect our family from unnecessary rumors.
According to those who saw him that day, he stood on a hill in silence, staring toward the east.

Nobody ever saw him again after that.

The news about my sister's condition spread before the envoy did.
Some people said that the situation would get better if we begged for forgiveness, some people asked for war as revenge, as they blamed her husband's empire.

There were also people who thought it all happened because of my trainer, and they thought everything would go back to normal once he was executed. And others were certain we would have to pay regardless of whether he were to be cut down or not.

Amidst all the rumors, my mother remained silent and did not take sides. That was, until the Grim Reaper from the east arrived at our doorstep.

The envoy began speaking with my mother, his voice as gray and creepy as his face was.

Mom asked me to go to my room so I couldn't hear what they were talking about.
But, what I did manage to hear over the wall was that the cavalry captain, my instructor, attempted to assassinate the emperor. This was seen as an act of treason for which our kingdom was accountable.
The Reaper also mentioned that offering an ill bride was seen as a sin by the emperor himself and that he was willing to forgive the treason, should another bride be sent.

Not fulfilling his demand would bring great consequences to our kingdom.

Later that night, mother said it was the first time she resented my father for abandoning us. 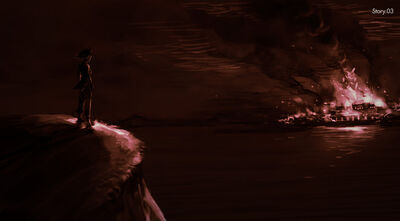 I could see dark clouds gathering in the sky. The rain was about to pour.

That day, my mother came into my room, holding a sword in her hand.
I knew immediately what it was about; she was going to force me into a marriage with the emperor.
If I were to refuse, she would have to kill me in order to protect our kingdom from that disgrace.

When she saw me, she knew I would never agree to marry him.
Without a word, torn apart between her love towards me and her sense of honor nurtured by antiquated rituals, she swung her sword. Just in the nick of time, I managed to escape her blade with a skill I learned, called Falling Petal.
The blade managed to slice off some of my hair, and as the hairs fell onto the floor, she said:

"My daughter, the princess is dead. It is your turn to go now..."

She left the room without looking back.

To this day, I remember those last words that came from under her breath while she was leaving the room:

"I'm glad I taught you the Falling Petal."

Mother then proceeded to evacuate the remaining townsfolk. Leaving my hair on the floor, I followed them, hearing the sounds of the enemy soldiers approaching. 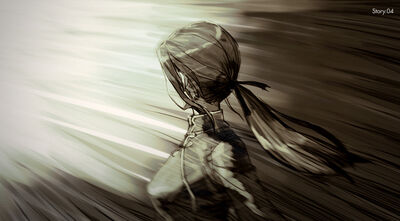 My journey has seemed endless, but my hair grew back quickly.

I will always remember the story that I left behind.

I must become stronger in order to save my people, forge an army, and reclaim our kingdom.

My name is Lynn.
I am the Princess of the Lost Kingdom. 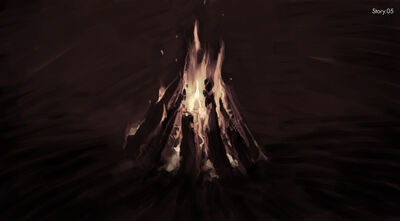 The young man broke the silence while he was adding wood to the bonfire:

"Why are you here, kid?"
"Kid? Be careful, old man."
"Old... Did you just call me an old man?! For your information, I am just 20 years old."
"As if I believe you! And I am not a kid!"
"Well, you surely are a scoundrel."
"What's that?!"
"Alright, alright, calm down. But tell me, what are you doing in a place like this that is filled with Fomors?"
"Huh? If you want to know, you better tell me your story first."
"Alright, you lady. Let's see. I am traveling in hopes of joining the Royal Army."
"The Royal Army?"
"That's right."
"Shouldn't you be heading to Rocheste then?"
"I already did, but they didn't let me inside, claiming that I was too weak..."
"... So?"
"So, I gathered some information, and it turns out that there is a mercenary group by the name of Crimson Blades near Colhen. I have also learned that if I gain enough experience with this mercenary bad, I will be able to join the Royal Army in Rocheste in the future. And with that, I am heading to Colhen."
"Colhen, you say..."
"So, that's my story. Now, care to share yours?"
"... I seek strong people."
"Strong, huh? Why?"
"Because, I have to reclaim what was taking away from me."
"How about I join you then? I am stronger than I look."

The girl grinned at him and stood up.

She started to walk away, but then stopped and turned around.

Lann waved at her with a smile.

The harmony of birds chirping stuck in her ears as she walked away from the camp, toward the rising sun.