So you wanna be Karok eh?

This is a introduction to the 4th character named "Karok" that will be released Dec. 14th in the Korean version of Vindictus, known as Mabinogi Heroes and is now in the NA version. In this article I will go over what you can expect from Karok, in terms of play style, skills, strengths and weaknesses. This IS NOT intended to be a build guide or a strategy guide for how to play Karok, but rather a general overview of the Karok character. 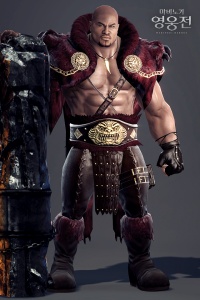 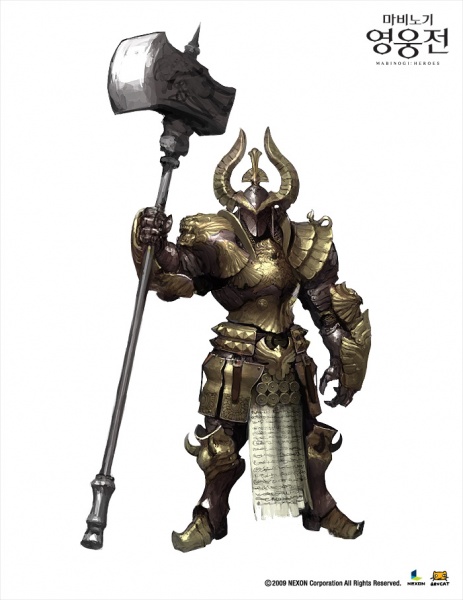 Karok is best described as a hulking giant type of barbaric wrestler. He stands a good 3 feet higher than the other 3 characters in the game and his model is nearly 2 feet wider than the other 3 characters. In terms of movement speed, Karok is one of the slowest. This is in part due to his enormous mass and large pillar-like weapon that he uses. Karok can dash like all other characters, so no need to worry about getting left in the dust.

Playing as Karok is like playing a WWF game. Expect to use a TON of different grab moves to pulverize your enemies in numerous ways. These grab moves range from pile drivers to battering rams to makeshift bats. When it comes to man-handling an enemy, Karok has a move for every situation. Karok is also the only character currently that can grab a boss. However, this is only available once you have knocked the boss down.

While grabs are an essential part of Karok's offense, they also play a vital part to his defense. Karok will be the first, if not only, character to be able to parry a bosses smash attacks. The way this works is sort of how finishers are performed in a God of War title. When the Boss initiates a smash attack, a small red bubble will appear above their head, warning everyone of an incoming powerful attack. It's at this point that a player using Karok will need to time his parry at just the right moment. If the parry succeeds, then the player will be placed into the God of War style duel with the boss. the player has the choice of holding on and allowing their teammates to bash the boss until Karok loses his stamina and the boss pushes him away, or holding on for a short while to simply avoid the attack and counter with your own.

The 3rd aspect of Karok would be his weapons. As you can see in the image to the upper right, Karok uses a large pillar to smash and batter his foes. This pillar swings slower than a Scythe and has less range. Most of the normal attacks and smashes are very slow and cover a small area around Karok. One interesting note about the Pillar, is that Karok can toss this thing like a secondary weapon and bash any targets in its path. after throwing the Pillar, a player can either choose to fight barehanded or run over to the pillar and pick it up again.

Karok's second weapon has been the talk of quite some debate. As you can see from this old icon that was made to portray Karok, He appears to be holding a 2 handed pole weapon. Some believe it resembles a Halberd, while others think it is a large hammer. There is currently no info of this weapon. It will be safe to assume that it will have a longer range and faster swing than Karok's pillar. Only time will reveal what this mysterious weapons true identity and potential is.

Overall, Karok's attacks are slow and, for the most part, short ranged. If you have become accustomed to playing as a Lann or Evie, then Karok's play style may feel frustrating to you. If you're a person that constantly finds yourself grabbing your enemies and bashing them into a wall on your Lann, or using the environment to kill the nasties, then Karok will be right up your alley.

Aside from the general stat skills and other basice universal skills, Karok will have access to numerous smash talents. There are only a couple of known skills that have names placed to them.

This move allows Karok to hold his hand out and block a attack. you will still receive initial damage from the hit, but it will replenish like stamina does. If you take too much damage while using DE, then you will be incapacitated. This move clearly has great solo potential.

This move can be likened to a Spear Lanns hurricane smash, in that once you hit the smash button to activate it, you can hold it down to continuously perform the move until you are out of stamina. Karok takes his pillar and bashes it on the ground over and over, as if he was trying to squash ants, or better yet, spiders!!!

These videos show how the Clash skill works when fighting bosses. The first one shows a quick parry, the second a longer parry, and the third shows a parry that is held for too long. Strategy is key here. Clash is indeed a Skill and not just some innate part of Karok. In order to parry, certain picky conditions must be met during a bosses attack. There is also a cooldown on parry that decreases the higher you rank it. This skill is obtainable after completing the Decisive Battle.

The staggering truth about Clash: After spending just over 50 levels with Karok, I wanted to add a few things on this introduction that might clear up some misconceptions I had about Karok before he was released. The parry skill, while cool and flashy, in its current state, is nearly complete garbage. I hate to burst anyone's bubble that thought Karok was a new Fiona replacement, but that couldn't be further from the truth. At max rank A, Parry lowers the cool down to 2 mins. That's right, you heard me, 2 mins in between Parrys. Not only that, but the amount of time parry takes to perform, the limited 6 diff. attks it can be used on and the pitiful dmg it does, make it a joke almost.

Just wanted to let everyone know what their in for, since this has been one of the most widely talked about moves that Karok can perform. It really is sad how it turned out.

Here is video of all the other skills and moves that have very little info available at this time. Simply put, quite epic.

As with any class, there is always a upside and a downside. In this section I will try to go over all of the pros and cons that I know of currently. Keep in mind that this section is based off of the current Korean implementation of Karok. Some things are subject to possibly change by the time Karok releases in Vindictus NA. When I was asked if I wanted the good or bad news first, I always chose the good, so let's start there shall we?

That's all that I can think of for the positive side of things right now. Feel free to add to the list as long as they are feasible. Time to move on to the cons.

That about wraps up the cons. Again, feel free to add any realistic cons you feel I missed, to the list.

To sum it all up, Karok is a very interesting character to play as. His normal attacks are amongst the most powerful in the game. He can accomplish the same results as other characters 3 or 4 hit smash attacks, with only a 1 hit smash attack. In the early levels you'll feel this immense natural power come through while you solo. Later in the game is when things start to balance out. The biggest disappointment that you'll encounter with Karok, are his signature flashy moves that are all over youtube. While these moves look powerful up front, they tremendously fail to deliver in practice. The Parry skills cooldown and lack of damage make it worthless. The Drop Kick also suffers the worthless syndrome due to the same lack of damage and lengthy animation. The boss grab attack can only be performed on just over 20% of bosses and at later stages in the game, deals less damage then if you were to just keep attacking with normal hits and smashes. So you end up simply using basic attacks later on, and throwing your flashy stuff to the wasteside. Still, if the idea of lugging an enormous log around and bashing stuff with it over and over excites you, then Karok will be right up your alley when he releases.