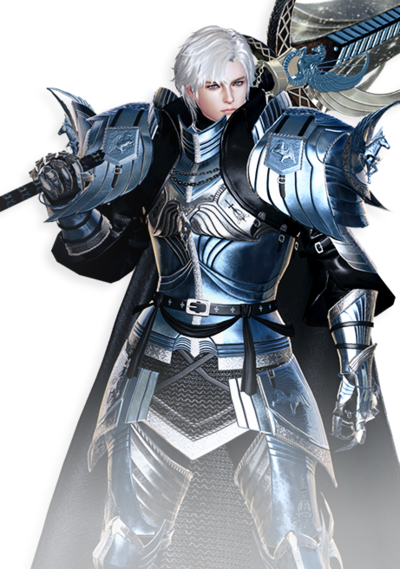 Kael is the 17th playable character of Vindictus. The date of release in Global is currently unknown.

A knight from the Royal Guard.

Questioning the values he believed in, he joined the resistance, but after being involved in an incident, the schism between two values led him to Colhen.
A character that can be felt through his deft movements of his Swordspear and ability to deal additional damage.

Kael character can be immediately distinguished by his offensive and defensive behavior.

Pressing the Normal Attack button allows Kael to perform Guardian's Blade: Strike, which allows him to attack without breaking attack chain. Pressing the Smash Attack button will activate Kael's defensive capabilities through Guardian's Blade: Parry skill to effectively defend against enemy's continuous attacks. After each offensive or defensive action, Kael can freely switch to the offensive behavior from the defensive one and vise-versa.

Some of Kael's attacks include multiple hits and allow for additional hits made with a single attack.

If Kael succeeds in delivering a multi-hit attack, he can quickly respond to enemy movements, as he can freely continue follow up with more offensive or defensive skills while multi-hit attack is still going. Depending on which multi-hit attack was used, the attack might add up to 2~8 hits, and is designed to satisfy needs for effective damage dealing.

Succeeding in dealing a multi-hit attack will net Kael the stackable [Flash] effect. If Kael successfully defends when he gains enough stacks of [Flash], he can counterattack with the Guardian's Blade: Counter skill. During the counterattack animation, Kael can avoid enemy attacks. 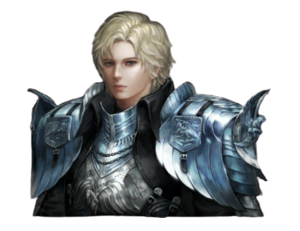 Kael's and Delia's kingdoms are geographically contiguous neighbors. Kael, who was renowned in his own kingdom at that time as the knight, was once mentioined as the sole candidate for the hand of Queen Delia.

After various twists and turns, the two met in Colhen as mercenaries, not being held back by their statuses of a royalty and a noble. Surprised by each other's bold moves, Kael and Delia became friends rather quickly, sharing their own beliefs with one another.