Get it Together, Rookie! Fiona Beginner's Guide

Fiona is a balanced warrior type character who wields a one-handed weapon and a shield. Fiona is relatively more complex than other heroes like Lann or Evie, thus she offers a deeper combat experience. Fiona can wear heavy armors in combat and is the only hero in the game who can block attacks. Fiona possesses slower but more powerful smash attacks.

In combat, Fiona uses her excellent defensive abilities to launch powerful counterattacks while her enemy is most vulnerable. Fiona's shield and counterattacks are key points to her game-play style. Thus, Fiona is recommended for players who prefer to use defense to exploit enemy weaknesses to their advantage. 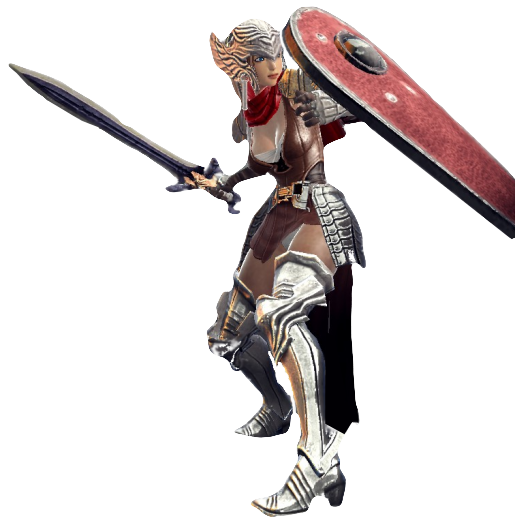 Heavy Armor provides more defense than cloth and light armor, however it is fairly heavy and sometimes difficult to wear. Heavy Armors provide good boosts in STR, AGI, and WIL.

Plate Armor provides superior defense compared to all armors in Vindictus, however it is very heavy and difficult to wear without endurance training. Plate armors provide very good boosts to AGI, and also boosts STR and WIL.

Fiona is able to equip Longswords when she first enrolls in the Crimson Blades. Longswords have short, quick attacks. Once Fiona reaches level 24, she'll also be able to equip Long Hammers after completing a short quest. Hammers have slower, more powerful blows than swords.

At first, Fiona can only equip small shields. Later on Fiona will be able to equip Large Shields.

Small Shields can block multiple normal attacks. Small shields can also block smash attacks, but Fiona will be knocked backwards. It is possible to use Counterattack with small shields.

Large Shields provide increased defensive capabilities. They can block multiple normal attacks as well as powerful smash attacks while allowing Fiona to remain steady. However, Counterattack is unavailable while large shields are equipped.

Fiona possesses several defensive skills exclusive to her. These include:

These skills comprise many of her most important abilities in battle.

Fiona's attacks largely revolve around choosing a smash per situation. She has 5 smash attacks, which are performed by first executing a certain number of normal attacks, and then one or more smash attacks. Let us denote "normal attacks" by the command N, and "smash attacks" by the command "S". As an example of this combo system, if Fiona executes 4 N's (NNNN) and then an S (thus, NNNNS), she will have executed a combo ending with an Amaranth Kick. The same "S" button is used to perform all smash moves - the number of "N"s preceeding the smash determines which smash comes out.

The names and properties of combos vary by weapon.

In the following lists, [square brackets] denote that an extra hit in the string is optionally usable after leveling the skill sufficiently (Rank 9).

Other notations are in use. You may hear these combos referred to by name, or as "0smash, 1smash, 2smash", or perhaps with L's and R's instead of N's and S's. Gauging when to use which combo is part of mastering basic combat. In particular, the player must learn which strings can be executed between bosses' attacks.

Fiona excels at using her defense skills to find opportunities to attack: this should be a main focal point during combat for her. To be successful in battle, Fiona should be constantly analyzing enemy attacks; looking for patterns and opportunities to land counterattacks. Thus it is not only important to know what kinds of attacks your enemy possesses, it is also important to know your own attacks so you can choose the best way to react in many situations.

It is difficult, nigh impossible, to impart all the different types of situations that will constantly arise in an ever changing field of combat. Do not fear, though: at the beginning of Fiona's journey she is given many opportunities to become familiar with basic gameplay. As her journey progresses she'll gain more skills that will allow her to deal with more complex situations.

Gauging enemy weaknesses is a basic technique that any character should learn early in the game. It seems simple, but sometimes gauging opponents is tough. Opponents usually have a variety of attacks, and players should take into consideration not only what attack is coming, but what attack your opponent might follow up with afterward. In this way, you won't take unnecessary damage and you can find opportunity to land attacks. Vindictus won't punish you too hard early on if you misgauge how much time you had to strike, but later on you'll pay the price. It is important not only for Fiona to analyze attacks, this is a important factor for Lann and Evie as well.

Fiona has this skill the moment she enrolls in the Crimson Blades. Guard can be used to raise Fiona's shield. Guard can block normal types of attacks. For many enemies early on, you will be able to guard against most all attacks and then use the opportunity to strike while your enemy is vulnerable. Guard consumes an amount of your shield's toughness: when the shield's toughness reaches 0, the shield will break and will lose much of its effectiveness.

Fiona can learn Heavy Stander after completing Decisive Battle. Heavy Stander is much like an extra sturdy Guard: its main function is blocking powerful smash attacks. Blocking any attack with Heavy Stander consumes more stamina than simply guarding, and more toughness is lost as well. Early on Fiona will still take some damage even if you block a smash. As Heavy Stander becomes higher ranked, this damage eventually becomes 100% negated and the toughness the skill consumes is decreased making this skill very valuable.

Readers may remember that early on in the guide there is two different types of shields mentioned. Small Shields can block smashes, but Fiona will be knocked backwards and out of her Heavy Stander stance. Large Shields can block smashes but Fiona is able to block many smashes in a row without being knocked backward. However, there are some skills you cannot use with Large Shields, and these will be explained later.

This is a skill Fiona learns after some progression through her journey. Counterattack can be executed after a normal attack is guarded with proper timing. Fiona cannot use this skill while in Heavy Stander, thus smash attacks cannot be countered with this particular skill. Counterattack is also unavailable while using Large Shields. This skill becomes very valuable in many situations, so it is recommended that once you learn it you invest time into becoming proficient at it.

Counterattack does not inflict as much damage as a some smashes, however it greatly increases your chance to knockdown a powerful enemy. Enemies that are knocked down cannot attack or move for a period of time, thus having a skill like counterattack is very valuable in many situations when fighting tough bosses.

However, counterattack does require some practice. Just remember that several conditions must be met to perform counterattack.

The video on the left demonstrates successful counterattacks. Note the different timings and the visual difference between normal and perfect guards.

These are not skills, but rather techniques that use certain skills to benefit player gameplay.

The Heavy Cancel Technique, also known as Heavy Stander Cancel (HSC), uses the skill Heavy Stander to negate some delay after attacks are landed. Players may notice that after executing a smash combo, there is some time after the combo where the player cannot begin another attack; however, Guard and Heavy Stander may be used. If a player quickly uses Heavy Stander after a smash combo and quickly returns to normal stance, the player can more quickly launch into more attacks: thus, the usual delay between attacks is "canceled." This technique can be used in all smash combos, as well as other attacks like Counterattack and "sprint bashing."

The Heavy Cancel Technique is especially crucial to Longswords: longsword combos have considerably more delay than Long Hammers. The benefit, if there is any, is considered to be negligible by some Long Hammer users.

Sprint Bashes are executed while sprinting and then using a smash attack. It looks something like a shield bash or blossom blow. Sprint Bash does not inflict much damage, however it does have a decent knockdown rate. If you use Sprint bash near a ledge, it will give a significant boost and carry you farther than if you rolled off of the ledge.