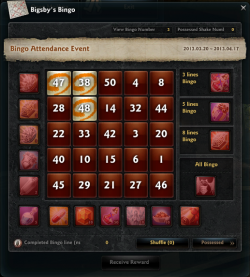 A Bigby's Bingo Board with some numbers already filled.

Bigby's Bingo is Vindictus take on the popular game of chance, Bingo.
It consist on gathering numbers from several sources and completing a board to win several rewards.

The board consist of a 5 x 5 grid with randomly generated numbers.
In there, we can see the numbers that we already have and the ones that we're missing.
We can also have a glimpse of what prizes we can win by completing lines.

If used, a Bingo Shaker Coupon (NA) or Bigby's Bingo Shake Numbers Coupon (EU) can shuffle the numbers on boards to ones that can be more favorable to the player, or not. Only the outline of numbers will change, not the numbers themselves. These coupons can be used while there aren't at least 10 numbers completed on the board and while a line isn't completed.
To use one, buy them from the Supply Depot and then click on "Shuffle".

That numbers go from 1 to 50 and are stored in another window that can be accessed by clicking "Possessed".
The numbers can be obtained from Bingo Number Pouches by doing the daily story Event: Daily Bingo Tickets (NA), Normal Bigby's Bingo Number Boxes by doing the daily story Event: Strange Traveler's Bingo Present (EU), or from a Special Bingo Number Pouch (NA) or Special Bigby's Bingo Number Box (EU) that can be bought in the Supply Depot.
After acquiring a number, it goes directly into the 'Possessed' section of your board, as well as onto your board if the number is listed.