Hello! Im Rawr on the West Server! I've made this guide to help all Newbies =) Please note that i'm doing this of my free will and in no way am I getting paid for this. If You Decide To Edit This Page Please Leave A Time Stamp Down at The Bottom By Typing 4 "~". Also I realise this guide is very large and may be somewhat in-accurate. If you notice any please, either change it yourself or get a hold of me. Any Suggestions on more content?

Please be aware that if you live outside of the US or Canada, you can not download the game off this site. The IP block will kick you from the game the moment you try to launch it. The EU version should be available by the end of 2010.

You can however use a VPN service (for example USA VPN service) with an endpoint in the US or Canada in order to access the game, several EU players do this successfully.

The Server you pick will affect you largely. Please keep in mind that the West and East are actually Geographically orientated.

The West Server should be played by players who live on the West Side of North America.

The East Server should be played by palyers who live on the East Side of North America.

Picking a class shouldn't be decided on the toss of a coin. The class you pick will greatly affect you throughout the game. If you like hiding behind a shield to greatly reduce damage Fiona is right for you. If you like quick attacks that really leave a mark on your enemy try Lann. On the third hand;) Evie can be used to heal other players and attack from a distance. After The Prologue you are brought to a Physical Appearance Creation. The Characteristics have no affect on your character, with the exception of Height which affects your speed and weapon range. Shorter characters are given less range but faster movement. Taller characters have more range but, they move slower. 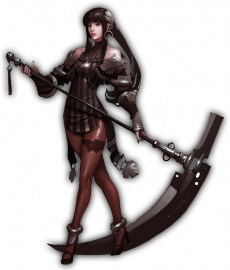 Evie is a magic user who can wield a staff, or later on in the game, a battle scythe. Both are wielded with two hands. She can use elemental magic spells as well as control gravity. She has a different health/defense system. Unlike Fiona and Lann, instead of taking damage directly from her health points (HP), Evie has a magic shield from which it is removed from first.The shield itself has five levels and when all five levels are destroyed, Evie then takes damage. Luckily, over time, the shield will recover and prove useful once more. Although she is weaker in terms of health and strength than any of the other characters Evie still plays an important role in a group with her high-powered spells and her ability to conjure golems from the scenery.

Lann is the first male character of Vindictus, who specializes in dual-wielding weapons, most notably swords. His attacks are speedy, and in the battlefield his enemies are left breathless at his seemingly non-stop whirlwind of slashes and thrusts. Because he relies on speed, Lann starts out wearing light armor. As he gets stronger, he learns to wear heavy armor without impeding his quick movements.

Fiona is a balanced warrior who wields a sword and a shield. She values defense, so she uses her shield to protect herself during combat and then strikes strategically when enemies aren't expecting it. She is able to wear heavy armor from the start and later learns to wear plate armor as well.

The Prologue serves as the introduction and tutorial to Vindictus. A player will be start in the Prologue after they select a new character. The Prologue may be skipped at any time by pressing Esc.

After character creation you will receive your first quest. Its pretty self-explanatory. Follow the instructions and you'll get it. The Quests are divided into Main Stories, Sub Stories, Skill Stories, Equipment Stories,and Event Stories.

Welcome to Colhen, your base of operations. Colhen is where you will talk to the various NPCs, start quests, craft, sell items, purchase items in the marketplace, learn story and plot information, and travel to the docks to embark on missions. Feel free to explore around here and learn and speak with other players. This area is a safe environment and you will not be harmed or die in any way. It is a community social area to meet other players.

There are a variety of shops throughout Colhen. To the North-East theres the Mercenary Outpost. In there is our base of operations. However Ceara sells Skill Books, and Marrec sells basic Supplies. Gallagher sells Fishing Tickets Which are used for Fishing. To the North-East theres The Forge. Here you can repair,craft, and enhance weapons and armor. To the South-West theres The Genreal shop. In here there typically are a lot of NPC's. Including Aislinn who sells supplies and Equipment story sets. Clodagh can be used to craft Cloth armor.

Intro To The Docks[edit | edit source]

Once you’ve oriented yourself, you’re wondering, where do I go to get back in the action!? Look no further than the Docks. This is a separate area for players to embark on missions (also called Battle Quests). After you’ve explored Colhen sufficiently, one of the NPCs gives you a quest to orient yourself in the mercenary training grounds to send you back in the action. You make it to the docks and you go, how does this work?!? What does this mean?! What are all these buttons? Who are all these people!? What’s going on? I’m here to assure you, as you get more familiar to the game, more of the things you see in this area and pop-up windows become more meaningful and most of the things you see are not important until later on in the game when you’ve had more experience. To the South is the road that will eventually lead to Rocheste. Just east of the road is the Magic Laboratory. In here is Bryann who sells potions and who can be used to craft a variety of items. To the North of the Laboratory is The Travelers Shop. Kirstie resides here and is used to craft most light armors. She also sells supplies.

The Boats will Take you to either a Battle Quest or Fishing. All The boats (excluding the furthest to the left) will take you to a battle quest. To Do so approach the docks and chose your desired quest.

The Furthest to the Left will take you Fishing. It Will Costs You Fishing Tickets to board the Fishing boat. Which can be bought from Gallagher in the Outpost. On the Fishing boat you must purchase harpoons from either the owl or approach the Tent to purchase a full capacity of Harpoons. To Fish simply aim your harpoon at the black cloud of fish that periodically appear.

Battle missions are simply dungeons. Select your Mission and you will be transported to the boat. From here you can either launch or wait for other players.

Bosses require different Tactics because of the fact that its difficult if not impossible to knock them down. Its wise to make good use of your secondary weapons here, due to the fact that they often stun the boss faster then you can by normal attacks. Learning the attack patterns of every boss would be wise.

You can manipulate the hotkeys of the game in the Options section. However I recommend staying to the Mouse Mode. Make good use of the F12 hotkey. It can be used to Ready up on boats, If pressed twice on boats that require tokens will automatically sync in tokens and ready up(Cant be host). Also In dungeons when another player reaches the end of the stage before you, you can press f12 to ready yourself to enter the next stage.

Whenever you use your equipment in a dungeon, it loses a small amount of durability per zone of the battle. Whenever an item's durability reaches 0, you won't be able to equip it. To remedy this, you take it to your local blacksmith (Ferghus) to repair it.