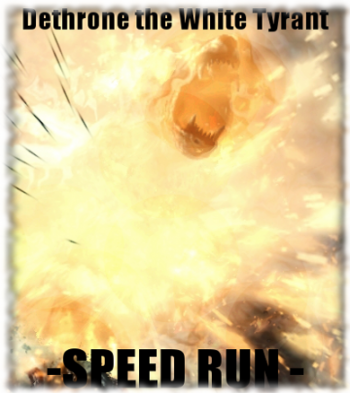 Dethrone the White Tyrant is a RAID battle. This battle can be cleared very quickly and efficiently (you can avoid being damaged completely) with cooperation, so many players over the level of 20 prefer this battle for collecting AP (and EXP) quickly. The cooperation of the party is crucial in this battle, so this guide is written in the hope of increasing the efficiency of these parties.

In short, you must be at least level 20 and have completed 160 Battle Points in Kobold Chief before you can attempt this battle.

If you are planning on hosting a speed run, it would be in your best interest to write "Speed Run" or something similar (like AP Speed Run: BRING SPEARS) as the Battle Name to indicate to potential party members that you have a speedy finish strategy in mind. Your party members thus should be aware of the strategy involved in Speed Runs. (hopefully)

"Season of Macha" is commonly selected as a Battle Oath as it rewards the most additional experience upon completion.

You may choose either Normal or Hard for Speed Runs. Hard Mode may actually be completed quicker and party members will receive more Evil Cores and 20% more gold, so this may be preferred as, ideally, you shouldn't take any damage anyway.

What to Bring[edit | edit source]

The absolutely most important equipment to bring is Spears. Do not bring any other secondary weapons to a Speed Run. Also, please bring your best armor and weapons. It may or may not make a huge difference in terms of finishing the run, but that is irrelevant: the objective is to finish as quickly as possible, so being able to do as much damage while you can is desirable.

The objective is to finish this battle as quickly as possible. Be respectful to your party members and make absolute speed and precision a priority.

There is only one room before boss's lair. As you enter the room, kill the green Kobold Warriors. This will trigger a spawn of Red Spiders throughout the room. Party members should be split between being at the entrance to this chamber and to the farther end. It is important to kill all the Red Spiders quickly; once they are dead, the red barrier at the far end of the room will drop and the party can proceed to the boss's lair.

There is another spawn of Red Spiders that is triggered by you approaching the farthest end of the room, however these spiders should be ignored (remember you can dodge over them.) If you are not the first person to enter the end of the room, be ready to press "F12" so the party can move into the boss's lair as quickly as possible.

Keeping to the priority on speed, please ignore any Evil Cores that may drop, ore veins (you shouldn't have mine bombs anyway), and any subsequent spawns of monsters.

As you enter, sprint toward the far end of the chamber until a small cut-scene plays. There is a small group of kobolds enjoying a lovely picnic but their laughter and burping abruptly stops as they are alerted to your presence. After this scene ends run pass the line of kobolds that appear to trigger another cut-scene wherein the boss appears.

The Important Part: As soon as this cut-scene ends and the Giant Polar Bear is roaring, every party member should begin tossing spears at him. It should take 4-5 spears to bring him down. The boss will stay on the ground for an extended amount of time which will allow you to freely attack; more than enough time for a full combo in most cases. As the boss gets back on his feet, repeat the spear-tossing process to bring him down again. This process of spearing the boss as he gets up should be repeated as many times as necessary until he is defeated. It's as simple as that.

After the Battle[edit | edit source]

After the battle ends and your gold and exp has been tallied, the decision to replay the battle or to return to town should be made quickly.

In special cases where your party is devoted to completing several runs quickly, replay should be selected by the host as soon as possible. Once you return to the lobby/boat (and even before) players and host can press F12 to automatically select your Silver tokens, and then press the Ready button.

This is a video of a very well executed Speed Run.